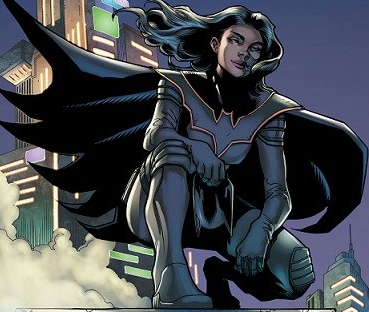 Filling out the volume is a story created by a guest team called Batwoman Beyond. There’s a Batgirl in the Beyond universe? Nice! I like the premise. Batgirl works in a tough part of town not even Batman frequents. Why? Wish someone in the story told me.

This takes place during the Rise of the Demon arc so yay for Max doing something other than waiting around and being worried. Commissioner Gordon is kidnapped and it’s up to Batgirl and Max to save her. Max, you need an alias, my friend. And, Gordon, are you the same Gordon from the regular arc because here you’re drawn more like older Barbara Gordon. But, I swear I thought the main story Barbara Gordon was her granddaughter. She looked middle age at the most. I’m confused.

END_OF_DOCUMENT_TOKEN_TO_BE_REPLACED

Let’s jump right in with the multiparter, Rise of the Demon. Following the events of volume one, Bruce Wayne is back and everyone’s happy. Looks like this volume is all about happiness and—oops! The League of Assassins are back and ready to assassinate…their own member, Curare? What the schway? Okay, sidebar, how does the League continue to exist? They’re always getting stomped by Batman or some other hero or infighting. Maybe save all that bloodthirsty dysfunction for Fortnite.

Rise of the Demon is a good story, but I liked the previous one more. I enjoyed Terry back in the game and Bruce reflecting on his life but I felt there’s too much inner dialogue in these comics. You always have to be in their head. It’s a general problem I have with western comics. You never escape the main character’s constant thinking. Not a fan of it, but that’s just me.

END_OF_DOCUMENT_TOKEN_TO_BE_REPLACED

It’s true, I searched. There are maybe three Twice cosplayers at max! And, yes, I get the irony of that number.

Okay, chapter 184. Let’s begin with Eri and the surprise everyone predicted. Yes, readers, Eri is moving to U.A. I’m excited. We may get a chance to see her training to control her quirk as well as her interactions with other U.A. students. Bakugou meets Eri, yes, please! Speaking of Eri meeting people, where’s my Eri+Kota scene? Damn you, Horikoshi. You better not mess this up. I know the cuteness factor is a striking Mach 10 but it’s for the greater good.

END_OF_DOCUMENT_TOKEN_TO_BE_REPLACED

Mangaka ANDOU Yuki didn’t change the manga game,  but she did make Machida-kun to Sekai a solid story worth anyone’s time.

Machida-kun no Sekai stars a high schooler named Machida Hajime. A guy not that good at school or much anything else. But, the one thing he absolutely excels at is relating to other people. Machida knows how to talk to others, get them to open up which leads to him helping them in some way. This is a character piece. Every chapter Machida is either helping someone to trying to understand his own feelings about people and the world around him.

END_OF_DOCUMENT_TOKEN_TO_BE_REPLACED

For those not familiar with how western comics work, as a way to bring in new readers companies will renumber issues after awhile. It’s a marking gimmick. Basically, this volume one isn’t the true Batman Beyond volume one, but a jumping on point for those wanting to give the series a chance. Everyone on the same page? Let’s begin.

Escaping The Grave, I like it. It feels like Batman Beyond. Yeah, I’ve seen the cartoon series and read previous Beyond comics, but I stopped reading the series years ago. Can’t remember why. Think DC’s New 52 had something to do with it (when in doubt, blame New 52). Either way, I lost interest. After reading the volume my Batman Beyond thirst is back.

The volume picks up after the last arc (which I didn’t read) ended. Terry McGinnis is back (Huh?), his little brother, Max, knows he’s Batman (What?), and Bruce Wayne, Terry’s mentor, is dead (The f*ck?). Whoever wrote the last arc when out with a bang. At least this writer’s quick to explain all the important past plot points, including a general recap of Batman Beyond’s origin. Again, nice for old and new fans.

END_OF_DOCUMENT_TOKEN_TO_BE_REPLACED 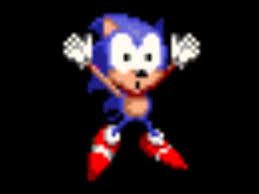 A spherical super scientist constantly trying to take over the world. Killer robots. A water demon. Demons, in general. Even clone happy evil aliens. The world of Sonic the Hedgehog can be dangerous—didn’t the freaking planet break apart in one game? Ugh! Better pack my first-aid kit.

My actions in Sonic’s world depend on whether I’m a human or an animal. Humans are pretty much screwed in the Sonicverse. They have no powers and G.U.N., an organization “fighting” Dr. Eggman, is a joke. If I’m human I’m doomed. I won’t join G.U.N. (because I don’t want to get killed by a coconut throwing robot monkey or some crap like that), so I’ll have to move to the city and find a quiet job close to my house. Why? Because I don’t wanna be bouncing twenty feet in the air on springs to get to the office! I’m not driving my leased car through loops either. No, I’m working from home and hoping for the best.

If I’m an anthropomorphic animal, let’s say a bunny, things are slightly different. First, I get to enjoy walking around without pants. That’s freaking awesome! But, fur on my butt can cause problems in the bathroom. Moving on, I can at least fight. Spinning? Why not. If foxes and squirrels can do it, so can I. Better horde as many gold rings and power-up TVs I can. Shields are a must. Can I sell those gold rings for quick cash or did their value plummet due to easy availability? Guess I’ll need to find something more valuable.

Just stick a battery instead of a bird inside and voila! You’re very own guard robot, assuming Eggman doesn’t override them upon reassembly. Better put that in the warranty.

Okay, may as well find a chaos emerald. Not all of them, just one. Put it on ebay and I’m set for life. Each one generates limitless energy. I’m sure some governments and internet monopolies are already drooling.

Alright, time to gather the data and compensating for bonus levels…I can survive in Sonic the Hedgehog’s world for:

END_OF_DOCUMENT_TOKEN_TO_BE_REPLACED

Episode two picks up with Elely dragging her beat up dad, Percedal, to safety. In true Iop fashion, Percedal lets his young child go off to fight a giant bear-man alone—as you do. It’s the Iop version of a child’s first errand. And surprise, Elely can kick ass! Guess it makes sense with Percedal as your dad. I don’t want to imagine fighting anything barefoot in the snow. And Evil Kevin Smith’s only wearing a speedo—one of the few times being a hipster isn’t a good idea.

END_OF_DOCUMENT_TOKEN_TO_BE_REPLACED

Monkey D. Luffy picked a fight with one of the four pirate emperors and won. He beat Katakuri, Big Mom’s strongest crewmember, and amateur sugar cookie contest judge. His bounty is now over a billion. Where does Luffy go from here? Beating a Yonko, right? Wrong! …Nah, just kidding! Beating a Yonko is Luffy’s next feat. Maybe.

Is it possible Luffy will defeat an admiral first instead? Admiral Green Bull could tussle with Luffy, but I don’t think we’ll see a clear winner if it happens. And, don’t forget, Luffy has to reach Kaido. His subordinates, the tough ones like Jack, won’t make it easy. Safe to say Luffy and his allies will have to earn Kaido’s defeat. Heck, I bet Luffy will need to tag-team to defeat the Beasts Pirates Captain. Yep, based on the number of allies coming to Wano and it being Luffy’s first Yonku takedown, he’ll need help. LOTS of help. Luffy’s big one-vs-one Yonku fight won’t happen until he faces the final boss, Blackbeard. Speaking of Blackbeard…

The other biggest Pirate King contender will kill Shanks. Shocked, right? Probably not. Blackbeard killing Shanks theories are common. So, why am I bringing it up? Because Blackbeard now HAS to kill Shanks. And, it’s all Luffy’s fault.

END_OF_DOCUMENT_TOKEN_TO_BE_REPLACED

One Piece’s Whole Cake Island Arc is over. And once again, Luffy gained another kingdom ally with Germa. And, don’t kid yourself, they’re allies. I know. I know. They’re assholes who deserve to die except Sanji’s sister but its One Piece. You can be a horrible piece of shit, but as long as you see the error of your ways or you only did that crap in the past it doesn’t count.

Anyway, the Firetank Pirates—Luffy has them as allies too. Nice. But, wait! Luffy is also allied with Law and his Heart Pirates. Could there be a pattern? Yes. Not even gotta be cryptic about it. Longtime One Piece fans know the Strawhats have been cozy with kingdoms in the past. Kingdoms and gathering new Strawhat members. But, as a big contender for Pirate King, Luffy needs more than a crew. He needs powerful pirates on his side. And let’s face it, no one is joining the Strawhats after Jinbe. NO ONE. Yes, that includes Carrot. She not unique, guys. Being a female bunny character isn’t enough. Being a lookout isn’t enough. You have to be the best and nothing Carrot has done isn’t considered the best.

END_OF_DOCUMENT_TOKEN_TO_BE_REPLACED

Damn, Oda. You are off the rails, out the park, and colliding threw buildings.

If anyone has videos or links to posts with females discussing sexism in One Piece, please share it. I feel like there’s a disconnect with certain male One Piece fans and it’s perfectly understandable. Being male and not wanting to criticize a manga you like can create a huge bias. But, am I overthinking it? Is it just acceptable that shonen manga is sexist to the point of being expected? Is manga one of the last mediums where treating women as weak pin-ups okay because, hey, traditionalism. It’s been done since the beginning, why stop now? Maybe I’m expecting too much from a man who grew up in a sexist country and makes a living creating sexist material? Maybe…oh no. Maybe I want Oda to change because it’ll justify my love for the series? Is this all a way for me to unleash my guilt? I don’t know, or maybe I don’t want to know.

END_OF_DOCUMENT_TOKEN_TO_BE_REPLACED

Half the comedy, all the taste

Between The Pages Of A Book

Near daily discussions of Star Wars, Seasonal Anime and Video Games. As well some other stuff along the way.

Exploring the magic of anime and manga.

Are YOU Amped Up?

Sharing Information About Writing and Illustrating for Children

Writing About All Things Pop Culture

Kneel Before My Awesomeness, Skin Puppets!